HTC One M9 in Kenya

by Vincent
in Android
2 min read 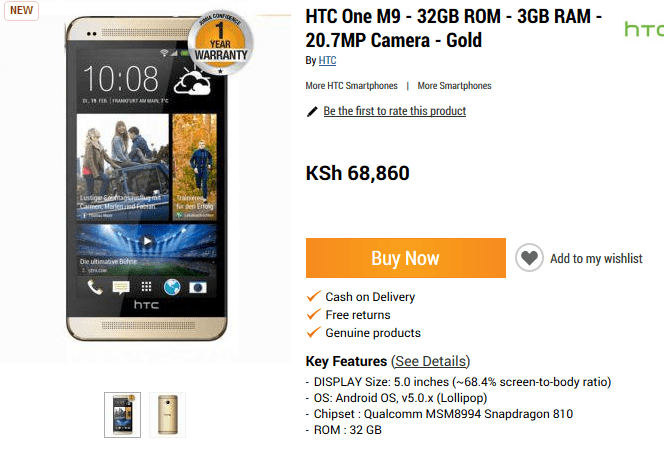 Finally one
of the most reliable resellers, Jumia Kenya, has managed to bring one of this
year’s most anticipated device to Kenya. This is the HTC one M9, previously
said in leaks that it was ‘Hima’ but that appeared to be the name codenamed by
HTC when it was manufacturing it. The device goes for KSHs 68,860 (as per the
date of this writing) and you can order it here and you will get your unit
according to Jumia’s shipping days, normally three to seven business days. It
is presently only available in Gold. Other coloring options might be available
later though this is the best looking option i have seen.

The device
comes featuring a 20.7 Megapixel Toshiba camera sensor which I had issues with the quality of the photos as mentioned in my earlier in depth post. HTC
retained their ultra-pixel technology with the front camera given a count of 4.
‘Selfie’ lovers will love this as ‘selfies’ look great without filters of
course. It has 3 Gigabytes of RAM and a 32 Gigabyte on-board storage with an
option of expansion using a micro SD up to 128 GB. The screen resolution is similar
to last year’s One M8 coming in at 5 inches Full HD with a resolution of 1920
by 1080 at 441 ppi (pixels per inch)  It also comes powered by Snapdragon 810 (
MSM8994), Adreno 430 GPU , Android 5.0 lollipop Operating System and Sense 7 UI on it which is the
latest from HTC as expected.
It is
wonderful seeing resellers here in Kenya bringing flagship devices faster than
before and even faster than some parts of the world. Maybe the top end market is picking up and the urge
of the latest phones with bleeding edge specs is being felt. Satisfying this
need before something else better is great for a smartphone business.
CHECK OUT : Forget what they say About Firmware Updates, there are no Specific Dates
Tags: Android
ShareTweetSendShare
Previous Post

Forget what they say About Software Updates, there are no Specific Dates

Downgrade Twitter for Android to a Version without Links

Google Pixel 5a with 5G Specifications and Overview

Downgrade Twitter for Android to a Version without Links